Alex Grey was an ISA Admiral who captained the ISA Solar Wind and lead the defense of Diortem during the initial outbreak of the Second Extrasolar War. She was also the head of Project Eschaton, a bio-weapon program, which she advocated it as a deterrent to Helghast aggression.

Born on Vekta into a military family, Alex Grey strove to prove herself to her father and brothers. She graduated top of the class in the Navy Academy and eventually made a name for herself after a display of cool and couragious behavior during the Orbital Blockade skirmish above Vekta. She was appointed First Lieutenant of the Cruiser Solar Wind, and was eventually promoted to Admiral in 2349. In 2340, she became the youngest ever in Captain in an ISA fleet.

Grey then distinguished herself in several colonial campaigns, including Delta Pavonis, Omicron Eridani and GB-34. Grey also helped negotiate an end to the Arcturus Insurrection, displaying considerable diplomatic skills. Sometime afterwards, Grey was appointed Chair of the Altair Conference on the future of unaligned colonies.

She was promoted Admiral of the Fleet in 2349, where she argued the risks of a second extrasolar conflict and lobbied for diplomatic approaches to Helghan through the Vektan ambassador Sepp Harkin, a family friend. The failure of these negotiations led Alex to be frustrated and disillusioned, which led to tensions between her and Harkin.

In 2355, she was seconded to the Defence Initiatives Board and given jurisdiction over the Experimental Weapons Programme in Diortem (codename: "Project Eschaton"). She developed a proactive interest in its development, advocating it as deterrent to a possible Helghast aggression in the near future, where she met opposition from some members of the ISA High Command.

Following the Helghast invasion of Southern Vekta, Alex was appointed regional commander by General Dwight Stratson, tasked with the defence of Diortem. As the Helghast surprise attack left the ISA short of manpower, Grey secured approval rights to contract the Phantom Talon Corp.

Diortem fell under heavy fighting in which Grey was captured by Colonel Vyktor Kratek and taken to the Halls of Justice to be interrogated on Project Eschaton. At the request of the ISA, Anders Benoit launched an extraction mission at the Halls of Justice in an effort to save Grey. Grey firmly refused to give information to Kratek, even being forced to watch ISA prisoners being gassed, before being shot as two PTC mercenaries, Arran Danner and Damian Ivanov, came to rescue the admiral. Grey survived from her injuries and was safely escorted by the mercenaries from the Halls of Justice.

Two years later, Grey participated in the counter-invasion of Helghan. She privately commissioned the Phantom Talon Corp into her services once again. Grey requested Anders's mercenary Arran Danner to rescue Sepp Harkin and his family, and a defecting Helghast scientist, Dr. Mandor Savic, whom Grey agreed to grant him amnesty in return for valuable intel on Kratek, specifically on the Helghast bio-weapon program derived from Project Eschaton. However, Harkin and his wife were killed, and Danner only managed to save the ambassador's son, Justus, and Savic. After securing Justus and Savic, Grey commended Danner before sending him in disabling the last Helghast Arc Cannons that is preventing her forces from seizing control of Kratek's section of Pyrrhus. After Danner disabled the cannons' power source at the Pyrrhus refinery, a paranoid Grey chose to abandon Danner after being falsely mislead by Benoit into believing that Danner would betray her by handing Savic over to the Helghast, and along with deeming him a liability for learning about the origins of Kratek's bio-weapon program from Savic.[1] But Kratek rescued Danner and forcefully employed him into his services.

Grey later tortured and interrogated Savic into revealing Kratek's bio-weapon was made far more lethal than Project Eschaton and its location at Facility X01, and the virus' plasmid trigger that is located in Justus Harkin. Grey and her men traveled to the facility with the intentions of utilizing the bio-weapon to completely wipe out the Helghast. However, Savic did not told her about the codes required to open the viral vault containing the virus. Upon arriving at the facility, Grey reaches the vault but only to find that Danner has already retrieved the bio-weapon. Grey and her men attempted to kill Danner but only to die in battle with the mercenary.

In the testimony gained from her interrogation, it is revealed Grey edited Savic's testimony to make it appear as though the Helghast launched the attack. It also suggests that this operation was carried out on her authority alone, given that she drafted the testimony to exempt the ISA of blame. She also wrote that she once believed in the possibility of peace, but that the events on Vekta changed her view, concluding that despite the price of countless millions dying, she believed it would be worth paying to end a conflict that would embroil a generation.[2]

Grey after being shot by Kratek.

Grey being interrogated by Danner 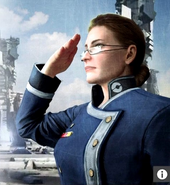 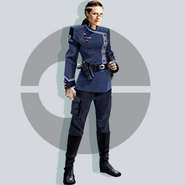 Add a photo to this gallery

Retrieved from "https://killzone.fandom.com/wiki/Alex_Grey?oldid=45404"
Community content is available under CC-BY-SA unless otherwise noted.