The term "half-breed" is often a derogatory term used to describe people who are the byproduct of human and Helghast descent.

Half-breeds retain traits of both humans and Helghast, such as pale skin and in most cases hair. They often do not need respiration devices. In general, half-breeds are physically stronger, tougher and heal faster than an average human (though not as much as a pure Helghast), as well as having calmer, more patient and less hostile mentalities than the average Helghast, giving them more of each race's genetic strengths rather than weaknesses.

Most half-breeds live as refugees and are discriminated by both Helghast and humans. Some time after the establishment of New Helghan the Helghast forcibly removed as many half-breeds, and humans, from New Helghan as possible and forced them into Vekta City. Little respect is paid to the half-breeds in Vektan territory where they experience social segregation and possible violence in Vekta.

In New Helgan they are viewed as traitors by pure strain Helghast and are treated far more harshly as such. In the wake of the Black Hand's terrorist attacks in Vekta City on 29 June 2390, all half-breeds residing in the Vektan side were deported to New Helghan. Despite supposedly being welcomed back to New Helghan as citizens they are considered undesirables. While half-breeds have been seen throughout the series Killzone: Shadow Fall is the first game to show sociological interactions. 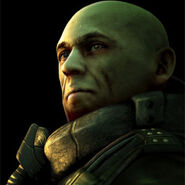 Gregor Hakha
Add a photo to this gallery
Retrieved from "https://killzone.fandom.com/wiki/Half-Breed?oldid=46288"
Community content is available under CC-BY-SA unless otherwise noted.