"And as our last breath tears at their lungs; as we rise again from the ruins of our cities... they will know: Helghan belongs to the Helghast."
—Scolar Visari[src]

The Helghan Corporation's colonization fleet first reached Helghan when they entered Alpha Centauri in 2128, and named it after their company. The planet was deemed uninhabitable due to hazardous dust and lightning storms, so the Helghan Corporation chose to deploy a prefabricated space station in its orbit to manage automated facilities on the surface.

Orbital facilities began to grow around Helghan in the following years, and the Helghan Corporation made good profits from the production of energy on Helghan, which was sold to ships which passed through the system. Shipbuilding also became an industry of Helghan, and became the largest of its kind outside of Earth.

In 2200, the First Extrasolar War broke out in Alpha Centauri between the Helghan Administration and the United Colonial Nations. The Helghan fleet fought the UCA Navy over Helghan, but were no match for the superior UCA Navy ships. During the battle many of the orbital facilities surrounding Helghan were destroyed, including the main hub which was home to the shipbuilding and management of the Helghan industries.

Following the war, the Helghan Administration was dissolved and the system was put under direct ISA administration. Planet Helghan became the destination of many Helghan loyalists who left Vekta to escape ISA occupation beginning in 2204 and ending by 2210.

Settlements were set up on Helghan's surface during 2215 to 2220, and the Helghan Administration was reformed to rebuild Helghan civilization. Life for the settlers were brutal, as many early settlers died to illness, storm damage and starvation within two years until the death subsided as the Helghan adapted to their surroundings and collectivized their resources and labor to rebuild their civilization under a reformed Helghan Administration. After a century, due to genetic conditioning and the planet's harsh environment, the third generation of indigenous Helghan were biologically adapt to the harsh conditions, becoming the now-mutated Helghast.

Planet Helghan was placed on trade sanctions by the ISA in which Vekta profited off from the planet's rich mineral resources at the expense of reinvestment on Helghan. In 2330 Vekta's economic exploitations of Helghan ultimately led to a two decade long depression on Helghan, as Helghan's wealth was spent on supporting its growing population and was unable to maintain its expensive machinery that could not cope with the planet's harsh conditions, leading to industrial collapse and mass starvation. This made Helghan's inhabitants more bitter towards the ISA and their collaborators, and allowed for Scolar Visari's rise to power in 2347.

Under Visari's rule, Helghan recovered from the depression as the Helghast broke the ISA embargo and traded directly to black-market suppliers on Vekta and other colonies, and later securing a beneficial contract with the ICSA for energy and materials. In turn, Visari's regime used their new wealth to enlarge the Helghast Military to prepare to reconquer Vekta and rebuild their empire in the Second Extrasolar War in 2357. Following the failure of the invasion of Vekta, the ISA invaded Helghan in 2359. Casualties were high on both sides, leading to the Helghast to ravaged Pyrrhus with a nuclear weapon and Visari himself dying at the hands of an impulsive ISA soldier.[2]

After Visari's death, a political conflict over who will assume the role of Autarch was waged between Admiral Orlock of the Helghast Military and Jorhan Stahl, the very influential chairman of the private weapons manufacturer, Stahl Arms. As the remnants of the ISA, who were left behind on Helghan fought to survive, Stahl plotted an ambitious plan to end the war by launching a direct attack on Earth; Stahl Arms harvested irradiated Petrusite gathered from the Pyrrhus nuclear blast zone to develop irradiated Petrusite-based weapons and warships, which Stahl assembled a fleet led by his flagship carrying hundreds of missiles whose warheads were filled with irradiated Petrusite to be use to saturate Earth's surface.

However, the political struggle between now-Autarch Orlock and Jorhan Stahl came to a violent climax, resulting in the death of Orlock and the Helghast race being plunged into civil war. This allowed the remaining ISA forces to destroy Stahl's flagship with hijacked Helghast Strike Fighters, causing it to plummet to, then explode in low orbit over Helghan. The ship's destructive payload of irradiated Petrusite missiles then detonated due to secondary explosions, with the resulting wave of energized radiation destroying the entire Helghast invasion fleet, the transfer station, and violently irradiating most life on Helghan.[3] This catastrophe later became known as the Terracide.

As of 2390, Helghan is an irradiated, near-lifeless planet. Though a small portion of the population had survived, presumably by fleeing to protected and fortified shelter or wearing protective gear, the entire planet has been irrevocably devastated. Not too long after this the Vektan government offered the remaining Helghast people to leave their devastated planet and live on Vekta, where they founded New Helghan.

During the course of 30 years after the Second Extrasolar War, Helghast corporations established high orbit mining facilities to extract Petrusite from the planet's interior and shipped to New Helghan as both a power source and an economic commodity.[4] Unknown to the public, only a portion of Helghan's surviving population were evacuated to Vekta while others were left behind. Those that remained on Helghan were rallied under Jorhan Stahl, who was believed to be dead by the ISA, and made a long term plan of renewing their war against Vekta. Under the guise of Petrusite mining operations, Stahl secretly transported raw materials to Helghan and used to construct fortified subterranean military bases and construction facilities, to rebuild Helghan's military might in preparation for a final war against the Vektans.[5]

Helghan is a hostile and hellish world, only recently made remotely habitable. Much of the planet is covered by rocky terrain and dominating canyons with some arctic-like areas; there are even oasis of sorts, in the form of hostile jungles teeming with dangerous predators. Helghan is rich in natural resources and minerals, mainly Petrusite. During Visari's reign, most of the planet's economy and resources were centered into building and maintaining Helghan's large armies and a fleet for interstellar conquest, leaving little funds for the improvement of the general population's well-being, hence the slums, dismal civilian infrastructure, and a visible lack of luxuries on Helghan.

Although a harsh planet, Helghan does have several basic forms of wildlife as befits a natural ecosystem. Insects seem to be the primary form of indigenous life, though most seem to be somewhat larger than their average Earth counterparts. Included are many harmless electric beetles that seem to fill the lower half of a natural food chain, serving as common scavengers that help to keep the planet free of organic refuse.

Likewise, there are also aggressive predators in the form of the common Helghan Spider, which can grow to be as large or larger than any large Earth rodents (i.e. rats, beavers, capybaras, etc.). It is normally found in the subterranean areas and wastelands of Helghan; based on observations, it seems to hunt prey by stunning them with an electric shock/bite, upon which it hunts as any standard spider would, via the dissolving of prey into a liquid and immediate ingestion of said liquid.

Helghan's plant life is also larger than standard Terran flora, as several plants are seen bearing resemblance to standard weeds, but are much larger. In its more tropical regions, Helghan is host to plants that can only be classified as bizarre. Some are almost animal-like in appearance, such as large fungi that appear to have hyphae structured like crab legs, and carnivorous plants resembling spider legs that attempt to skewer prey as it passes.

Some plants share some similarity to Earth plants, to a small degree Venus flytraps specifically. The Burster, which slightly resembles cacti, but glows orange and whose needles burst out of it when shot. Also seen in the tropical regions are strange avian creatures flying above the jungle canopy.

It is unknown if any of Helghan's ecosystem survived the Terracide.

Before Scolar Visari's rise to power, Helghan was ruled by the remains of the corporate Helghan Administration, which had once ruled over Alpha Centauri before the First Extrasolar War. Visari seized total power in the government after a popular coup in 2347, and was elected Autarch. With total control over all of Helghan, he reshaped the Helghan Administration into the Helghan Empire, a militaristic totalitarian regime along fascist lines.

With the recent death of Visari, control of the Empire fell to the Senate and charged them with appointing a new Autarch. Admiral Orlock was later appointed to this position, but ruled for less than a single day before his death alongside his rival for the position, Jorhan Stahl. With the irradiation of Helghan and the relocation of the Helghast, the planet is largely uninhabited and lawless. 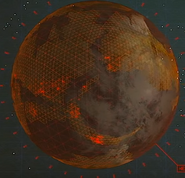