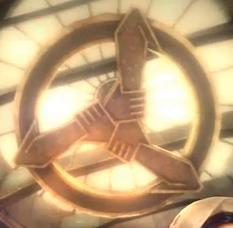 The Helghan Corporation was a massive energy, industry and mining conglomerate that originated on Earth after the formation of the UCN. Once it was established in Alpha Centauri, it reorganized itself into the Helghan Protectorate and then the civil Helghan Administration. The Helghan Administration led their efforts in the First Extrasolar War and later ruled over Helghan until Scolar Visari's rise to power.

After 'The Omen' incident in 2116, where six colonial ships launched by the UCN were lost due to a massive solar flare, the UCN opened up bidding on the colonization rights of the Alpha Centauri System. The Helghan Corporation, knowing the economic importance of the hub system, managed to win the contract due to the impressive credit it secured from the Interplanetary Banking Guild. In return, the UCN was to get 10% of the settlement's profits. However, this was not without accusations of fraud and bribery due to the Helghan Corporation's speed of securing the contract and conveniently having a colonization fleet nearing completion.

When the Helghan Corporation's colonial fleet entered Alpha Centauri in 2127-2128, the first planet encountered was rich with resources, but uninhabitable. This planet was named Helghan and a prefabricated space station was set up to manage mining operations on the surface. The rest of the Helghan Corporation's colonists reached the more verdant planet in 2129, which they named after the corporation's CEO Philip Vekta, Vekta. The resource-rich planet of Helghan was managed by an orbital space station to manage the facilities which extracted resources.

When the ISA was formed in 2133, the Helghan Corporation agreed to help fund ISA Alpha Centauri's forces.

By 2135, Vekta's settlements were firmly established. Mining operations on Helghan were well underway, and ships en route to new systems docked in Helghan's orbital station for refueling and trade. The Helghan Corporation gained lucrative profits from the fees charged to refill the ships, which it spent on building up Vekta and operations on Helghan.

As a Protectorate and Administration

The Helghan Protectorate was established in 2138, which helped to better coordinate activities on Vekta and Helghan. A symbol is chosen consisting of three interlocking arms, representing Peace, Justice, and Freedom to represent the unity between Vekta and Helghan. The Helghan Protectorate however was under the authority of the ISA, as was the Helghan militia which was filled with officers from the ISA Alpha Centauri.

Infrastructure on Helghan were completely finished in 2149. This increased the already substantial profit the Helghan Corporation made from mining and processing on the planet. By this year, most of the Helghan Corporation had relocated to Vekta to be closer to their operations, including the company's higher ups and their families.

The Helghan Administration refused to follow the UCN's regulations, but agreed to enter into talks with the UCN to resolve the issue. However, on the urging of powerful individuals and corporations, they decided not to budge on the critical issues of tariffs and self-defense, and the negotiations soon fail.

In 2199, the Helghan Administration declared Alpha Centauri an independent entity, beginning the First Extrasolar War. The UCN acts swiftly, knowing the economic chaos it could cause to Earth and the ideas it would give to other colonies. A UCA fleet was launched the same year to Alpha Centauri. Meanwhile, the Helghan Administration's numerically superior fleet and armies attacked local ISA forces in an attempt to expel them from Vekta and Helghan, though the better trained and equipped ISA forces manage to withdraw in good order, falling back to hidden bases to conduct hit-and-run operations.

The UCA fleet links up with ISA holdouts and moves on to Vekta. Initially the Helghan forces stationed on Vekta threaten to fight to the last man, but a UCA orbital bombardment convinces them otherwise, leaving them little choice but to surrender. By 2202 the war is over, Vekta is subjugated, the Helghan Administration forcibly dissolved, and the leaders of the Helghan Administration and Corporation are arrested, though some manage to elude capture.

In order to keep an eye on the activities of Alpha Centauri, the UCN passes authority of Vekta to the ISA. Another organization, the Helghan Authority, is set-up to manage the industries on Helghan. As Earth-loyal citizens begin arriving from Earth to settle on Vekta, a resistance flares up by diehard Helghan loyalists, and terrorist attacks are carried out by the resistance in an attempt to persecute and intimidate the Earth-loyal minority. However, all action is put down by the ISA, which is forced to enact more brutal and draconian punishments in order stop the terrorizing and persecution of the Earth-loyal colonists. Eventually in 2204, Helghan resistance members ceased their attacks and, along with other Helghan loyalists, begin an exodus to Helghan.

The Helghan Administration isolated itself from all outside contact, becoming increasingly paranoid of all outside influences and motivations. Because of this, they notably denied an offer made by the Independent Colonial Strategic Alliance for them to join in 2223, despite the favorable conditions offered to them.

Embargoes on the system and the corrupt Helghan Authority's control of profits caused the Helghan Administration's job of managing their new existence even harder. The third generation of Helghan Administration subjects begin to be born on 2305, and thanks to genetic conditioning, they possess traits making them more resistant to Helghan's environment, which helps to ease the demand for medical supplies. Regardless, the Helghan Administration ran the settlements well enough, and finally headquartered itself in the planet's main city, Pyrrhus.

The Helghan Administration began to run into issues in 2230, from a combination of the continued trade restrictions, their industries going through an upgrade, and a larger population. A bad economic depression hits the planet causing a lack of vital supplies to develop. These conditions caused the people to grow more resentful of the ISA and their collaborators, as well as lose faith in the Helghan Administration's handling of the situation.

End of the Administration

Retrieved from "https://killzone.fandom.com/wiki/Helghan_Corporation?oldid=44976"
Community content is available under CC-BY-SA unless otherwise noted.