The Helghast Army is the military force of the Helghan Empire. Its earliest origins can be traced to the Helghan Corporation's militia, which policed the Alpha Centauri system alongside the local Interplanetary Strategic Alliance contingent.

During the First Extrasolar War, they won several early victories against the ISA forces, but after years of fighting, they began to suffer from decisive defeats by both the remnants of the ISA contingent and the UCA Navy, ending the Corporation's attempts of secession. The Army was re-militarized under the reign of Scolar Visari and again waged war against the ISA during the Second Extrasolar War.

The early Helghan Corporation militias was founded in coincidence with the establishment of the Helghan Protectorate in 2138. As the militias were not directly part of the ISA or UCN/UCA chain of command, the ISA imposed strict limitations on their size and equipment, and having their officers provided by the ISA. Because of this, the Helghan Militia were less experienced and under-equipped than their ISA counterparts, and limited to only customs, police and ceremonial duties.

During the outbreak of the First Extrasolar War, the Helghan corporate forces relied on overwhelming numbers against the ISA contingent garrisoning the system. However, they were unable to eliminate the ISA, which many of their forces have escaped in the initial fighting and conducted hit-and-run operations against the corporate forces. Eventually, the corporate forces were brutally routed by the combined forces of the more technologically superior UCA and ISA in 2202.

At some point after the resettlement of Helghan, the reformed Helghan Administration established a standing army to protect itself and enforce its authority.

In 2347, the Army lend in their support of Scolar Visari in overthrowing the Administration in a successful military coup. Agreeing to Visari's ten year proposal, the Army would be at the center of the new Helghan Empire's efforts, enlarging the military and transforming the nation from a starving and impoverished refugee world into a galactic superpower, and the greatest threat to the United Colonial Nations.

The Helghast military invaded the UCN's breadbasket, Vekta, in August of 2357. In a matter of hours, two thirds of the planet fell to the invaders, including the planetary capital, Vekta City. However, once the element of surprise had worn off, surviving ISA soldiers successfully withdrew to several staging areas where they began counterattacks against the Helghast, slowing down and eventually halting the invaders' advance. This, combined with UCN reinforcements, had pushed the Helghast forces below the equator, where the frontlines would remain for virtually the rest of the Vektan Campaign.

While the Helghast were eventually defeated on Vekta, the incredible amount of death and destruction wreaked across Vekta showed the galaxy that the Helghast were no longer a weak, ineffective force to dismiss. Two years later, the Helghast proved themselves to be equally vicious and determined defenders as their attackers during the ISA's counter-invasion of Helghan, forcing the technologically and numerically superior ISA into a slow and costly urban war, before eventually routing and destroying the majority of the ISA forces, save for two small enclaves stranded in the wilderness, forced into hiding on Helghan.

The Army became involved in the political power struggle between Admiral Orlock and Jorhan Stahl of Stahl Arms following the death of Scolar Visari. The rivalry escalated into open civil war as Orlock led the Army against Stahl and his forces, in an attempt to eliminate Stahl and taking control of Stahl's armada that were loaded with irradiated Petrusite weapons to be use in the invasion of Earth. However, the infighting allowed the ISA remnants to destroy Stahl's remaining ships and leading to the Terracide, which destroyed the Empire and the Army was left in ruins.

What remained of the Army resettled in New Helghan, where they are incorporated into its security force. Former veterans of the Second Extrasolar War also joined the Black Hand terrorist group.

Unknown to the public, a large majority of the Helghast remained on Helghan since the Terracide and for over three decades had been secretly working to restore their military might under the leadership of Jorhan Stahl.

The army favored strict specialization of its soldiers, forbidding non-certified soldiers from utilizing weapons or undertaking roles they were not trained for.

The Third Shock Army were the elite of the Helghast military, spending six months enduring intensive training to seize Vekta through force. The regular Helghast Troopers, Light Soldiers, and Assault Soldiers formed the bulk of troops within the first wave, supported by special forces troops like the Elite Soldiers.

The core of the Helghast infantry defending Helghan from the ISA counter-invasion were the Assault Infantry, Shock Troopers, Riflemen, Support Troopers, and LMG Troopers.

The catastrophic loss of life of the Helghast nation forced the remnants of the Helghast army to shift away from the attrition warfare of the past and harness its technological prowess to develop a new breed of soldiers. Restructuring itself from the massed formations of the Second Extrasolar War, its strategic focus shifted towards obtaining victory outside of total war and towards defenisve actions and urban pacification.

With the shift away from massed formations of expendable, fanatical soldiers, the Army developed new military equipment to outfit valued soldiers with the same amount of firepower and overwhelming force as their predecessor formations.[1] They are trained and equipped to have an edge when and where ever possible, without starting open warfare on the endless Vektan border. In addition, is an increased reliance on robotic drones to supplement its numbers, which altogether has culminated into producing a lethal successor army.

The key specializations within the New Helghan military are the Assault Trooper, Commando and Engineer. 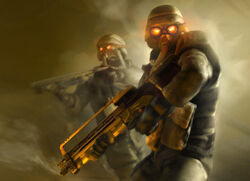 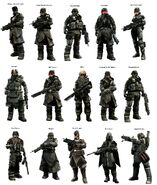 All Helghast soldiers in Killzone 2.

Helghast soldiers (with urban camo and snow camo) in Killzone 3.