The Navy is responsible for the defense of Earth's colonies and the suppression of any rebellions through space attacks and in the transportation of planetary assault forces. The ISA Navy is intentionally weaker than the UCA Navy to prevent the colonies from rebelling against the United Colonial Nations.

Their main ship-of-the-line is known simply as the ISA Cruiser. These provide the ISA with the persuasive force it requires to keep rebelling planets in line. Both these cruisers' weapons and their ground elements form the basic combat element of the ISA. At the time of the Second Extrasolar War the ISA Navy could deploy twelve battlegroups to Helghan, each comprising at least 4 warships, principally Cruisers. A large part of the ISA Navy consisted of Marines and Legionnaires, who formed an integral element of naval ship complements and as independent ground forces.

The Alpha Centauri ISA Navy took part in the First Extrasolar War, in which it fought the Helghan Customs Fleet for several years in hit and run tactics before UCA reinforcements arrived, annihilating the Helghan Corporation ships over the planet Helghan. After the war, the ISA Navy established a blockade of Helghan until support for containment began to wane. As relative peace began to settle between Helghan and Vekta in the early 24th century, the Vektan ISA High Command cut down funding and maintenance to the Navy in favor of a smaller customs fleet and its own orbital defense network around Vekta.

By the time of the Second Extrasolar War, the ISA Navy was overwhelmed by the Helghast invasion of Vekta. It was until Operation Archangel that the ISA Navy regained its footing and took out most of the Helghast's cruisers in the second assault wave on Helghan, without taking a single casualty. However, the latter stages of the invasion were marred with the loss of many cruisers over Helghan, including the ISA flagship New Sun. Only two of the ISA's cruisers, from two assault waves, were left after this first devastating counterattack.

Performance-wise, the Second Extrasolar War showed the performance of the ISA's ground forces as questionable at best, while their Naval task force very rapidly achieved temporary orbital dominance over Helghan, only being defeated through a deadly combination of a cunning Helghast ambush, the use of boarding parties which negated the ISA's Naval firepower, and an untimely realization of incorrect intelligence right when the Helghast revealed their hidden super cruisers and numerous fighters. Overall, the ISA Navy has, at the very least, proved it's tactical proficiency and worth, and thus seems to be far more effective than the ISA ground forces. 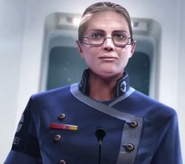 ISA Admiral Alex Grey.
Add a photo to this gallery

Retrieved from "https://killzone.fandom.com/wiki/ISA_Navy?oldid=44515"
Community content is available under CC-BY-SA unless otherwise noted.