"The time has come for some new fucking management."
—Jorhan Stahl[src]

Jorhan Brimve Stahl (2306 - July 7, 2390) was the Chairman and CEO of Stahl Arms, and the Autarch of the Helghan Empire. He is the main antagonist in Killzone 3 and Killzone: Shadow Fall. Stahl was a close advisor to Visari and held a great deal of influence in the government, but was disillusioned with Helghan's government and attempted to stage a coup d’état to assume himself as the planet's new leader.

Jorhan Stahl is the son of Khage Stahl, the founder of Stahl Arms, the primary weapons manufacturer for the Helghast military. Khage worked as a pipeline engineer in the Petrusite mines prior to founding Stahl Arms. He saw firsthand how Scolar Visari and his associates profited from the suffering of the Helghan people while publicly and rightfully blaming the Vektans for all their ills, and how Visari consolidated power amongst a chosen few selected solely based on their loyalty to him.[1]

As a result, Khage developed a strong contempt for Visari's hypocrisy while publicly serving as a major collaborator of the Autarch. Khage ultimately made a failed attempt to seize control of the Helghast State for himself which was thwarted by Admiral Orlock and other associates of Visari, and ended up dying in obscurity. Jorhan Stahl inherited his father's ambition, and his secret contempt for Visari and his chosen elites, but didn't share the more noble intentions of his father's, due to his blind hatred for the Helghast government and what they did to his family.[1]

Despite his secret ambitions, Stahl presented himself as a strong collaborator of Visari, but maintains his disdain for the Autarch and the current Helghan government. During the events of Operation Archangel, he was involved in the plot to detonate an ISA nuclear weapon over the Helghast capital of Pyrrhus to destroy the ISA forces in the city and ostensibly rally the Helghast people against the ISA. He correctly guessed that the ISA would make a successful escape after Visari's death. He later took advantage of the Helghan military's failed attempt to destroy the remaining ISA forces in an attempt to paint Orlock's command as incompetent.

Following the death of Autarch Visari, Stahl had been attending the Helghast Senate and having heated discussions with Admiral Orlock over who should be Visari's successor, and dealing with the remnants of Battle Group Mandrake that are present on Helghan. Meanwhile, Stahl had also been harvesting irradiated Petrusite left over from the nuclear detonation of Pyrrhus to be use in creating new powerful, devastating weapons to be use in his plans to attack Earth.

After the Helghast military failed to neutralize the ISA remnants, Stahl sends his personal army to capture Captain Jason Narville, Tomas Sevchenko and the other remaining ISA survivors, who are successful in doing so. However, some of the prisoners were rescued by ISA Master Sergeant Rico Velasquez and Jammer, who are able to pinpoint their location.

Stahl set up a live execution of the ISA prisoners of war, with Narville among them, as part of his propaganda piece to fueling his criticisms of the Senate and most especially Admiral Orlock. However, the execution was foiled by Velasquez and Sevchenko, who freed Narville and the POWs and as well discovering Stahl's plans to attack on Earth. Stahl escaped to his cruiser.

While Stahl is uploading his war plans to his cruiser, he is contacted by Orlock and the Helghast Senate, who they expressed their anger towards Stahl for not only failing to kill the ISA prisoners, but also for humiliating himself in front of the entire nation. It is at that moment that they revealed that they have elected Orlock as the new Autarch, to Stahl's outrage, who orders him to turn over all his weapons to the military. Furthermore, Orlock threatened to name him an enemy of the state and immediately execute him if he fails to comply. Stahl reluctantly consented.

Stahl met with Orlock on an arranged meeting at the orbital elevator to comply with Orlock's orders to surrender his fleet. Rather than following his orders, Stahl ordered Orlock to submit to him after having learned of Orlock's intentions to kill him. When Orlock refuses, Stahl has his cruiser open fire on the First Army's fleet, causing a battle to break out between Orlock's and Stahl's forces. Stahl also demonstrated that he developed not only more uses for Petrusite weapons, but also energy shielding for his cruisers. He then forced Orlock to his knees at gunpoint but only for the more experienced Orlock to stab Stahl in the gut, forcing Stahl to flee from Orlock. Stahl eventually overpowered Orlock and mercilessly beat him with a rusted piece of metal before finally killing Orlock with a shot of irradiated Petrusite from a StA-5X Arc Cannon.

Stahl proceeded to board his flagship, preparing to launch his attack on Earth. However, his ship came under attack by Strike Fighters piloted by ISA soldiers led by Sevchenko. After an intense fight, Stahl's cruiser is destroyed, with its Petrusite arsenal released on Helghan, devastating the entire planet. Stahl was presumably killed on his ship, but in reality he survived in an escape pod.

Stahl was left a deep pathological hatred for humans and blaming the Vektans for the destruction of Helghan in the Terracide. With the public believing Stahl's demise, Stahl took advantage of this as he gathered Helghan's survivors that remained on their planet and spent in the next thirty years rebuilding the Helghast military and amassing an army, under the cover of mining operations, preparing for their new war against Vekta.[2] During the interim, Stahl had remained in contact with the New Helghan government under Chancellor Hera Visari, and being the benefactor of the Black Hand.

In 2390, Stahl obtained the cooperation of defecting VSA scientist Dr. Hillary Massar, who agreed to create a biological weapon designed to exterminate all humans and half-breeds. Stahl's survival and his plans was eventually discovered by the VSA when the Shadow Marshal Lucas Kellan found the Black Hand leader Vladko Tyran in a telemeeting with Stahl.

The VSA dispatched an ISA fleet to assault Stahl's base on Helghan. Once the ISA engaged his forces, Stahl activated Massar's weapon in which it destroyed the ISA fleet. Stahl was soon confronted in his sanctum by Lucas Kellan, whom he told Kellan that killing him would make no difference, since others will simply take his place; he states that the Helghast will never stop fighting, even if they must suffer constant defeats, and claiming that one day, the Helghast will win. Stahl further states that the Terracide had a purpose: to purge the weak, and that Vekta will suffer the same fate. Moments after, Stahl is shot dead by VSA Director Thomas Sinclair, who also killed Lucas for his betrayal to him.

"I know what this nation needs, and I will cut out this disease of compliance and subjugation."
—Jorhan Stahl[src]

Jorhan Stahl is a slim, gaunt man, probably in his 40's or 50's, with white hair. He shares many common Helghast traits, such as warmongering and aggressive behavior. Stahl seems to favor the use of deception and advanced technology to achieve victory, and speaks contemptuously of the more traditional "brute force" approach espoused by the Helghast leadership.

He seems to hold a great deal of contempt towards the reigning Helghan government and the regular military, regarding them as "predictable idiots". Despite this, he does value the Helghan ideals of racial purity and superiority as he seems to have a strong hatred and disgust for half-breeds, furthered by the theory that Visari's own daughter and granddaughter were not of pure Helghan blood. He even went as far as to make a weaopon designed to kill humans and hybrid Helghans. Although-well spoken and intelligent, Stahl frequently uses vulgar words, which stands in contrast to the much more formal manner of speech used by all other Helghast. Extremely ambitious and ruthless, Stahl has his own agenda separate from that of the rest of the Helghast leadership, with his ultimate goal being nothing less than complete galactic domination, as revealed in his final speech to Autarch Orlock in which he expresses his plans to subjugate the Helghast senate, kill everyone on Earth, and rule over Helghan and the human colonies through fear of his planet-destroying weaponry. 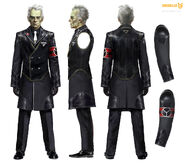 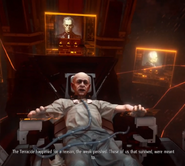