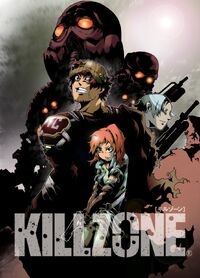 The Killzone manga was a one-shot published in Shōnen Ace magazine.

The manga was announced on August 22, 2013[1]. It was created to coincide with the release of Killzone: Mercenary in Japan. It was released on August 26. It can still be read here.

The story takes place during the first half of the Second Extrasolar War. It follows Ross, a mercenary with Phantom Talon Corp, and his partner Huey. The two of them meet Chajans, the sole survivor of an ISA platoon that was wiped out. When Ross learns about this, he decides to carry out the platoon's original mission to get a reward.[2]

Retrieved from "https://killzone.fandom.com/wiki/Killzone_(Manga)?oldid=41660"
Community content is available under CC-BY-SA unless otherwise noted.