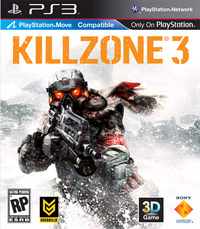 Killzone 3 is the fourth installment to the Killzone franchise. It was released February 2011 and its story follows directly after the events of Killzone 2.

The story begins immediately after the conclusion of the previous game. Following the death of Autarch Visari and the launch of a devastating Helghast counter-attack, Tomas "Sev" Sevchenko and Rico regroup with Captain Narville outside Visari Palace and make plans to evacuate Pyrrhus. They head for the mushroom cloud at the center of the city, where the few remaining ISA ships are gathering to extract their decimated ground forces, but Sev and Rico become separated from the rest of the convoy. Forced to fight their way out alone, they encounter heavy resistance as they pass through Helghast museums and other cultural centers in a city that is now a nuclear waste land. Upon reaching the extraction site, Sev and Rico disobey Narville's orders and proceed to rescue Jammer and her squad from heavy Helghast resistance. However, by the time they return to the pick-up site, they are too late, and can only watch as the final ISA ships depart the planet without them. With the ISA fleet heading home, Narville, Sev, Rico, Jammer and a handful of other surviving troops are marooned on Helghan.

Six months later, the Helghan senate meets to discuss their disappointment at the continued guerrilla resistance being put up by the stranded ISA troops, whom the Helghast have failed to seek out and destroy. The meeting ends when Chairman Stahl storms out following heated argument with Admiral Orlock on the matter of Visari's succession. After refusing to hand over the advanced weapons being developed by Stahl Arms to the military, Stahl organizes his private army to hunt down the ISA survivors. In the alien and dangerous Kaznan Jungle, Sev and Narville have set up a make-shift camp in which a small group of ISA troops are hiding out. After a patrol goes dark and the camp loses contact with Vekta, Sev and Corproal Kowalski move to the communications uplink located across the jungle. There they find that the Helghast have discovered their position and that their home world, Vekta, has brokered a peace deal with the Helghan high command. The ISA leadership then orders Narville to surrender to the Helghast to honor the terms of the peace agreement. Realising surrender will only lead to death — or worse — Sev and Kowalski race back to camp and attempt to hold off the attacking Helghast while the rest of the men evacuate. However, Sev and Narville are captured when they run out of ammunition, and any remaining men found are executed.

Proud of having captured Visari's murderers, Stahl broadcasts news of their detention on an open channel, allowing Rico and Jammer, who have been hiding out elsewhere on Helghan for the last six months, to launch a rescue mission and rescue Sev. The two then head after Narville. They track him to Stahl's base and discover a horrifying new infantry weapons system that uses irradiated Petrusite, inflicting a horrific death on its victims. Disguised as Narville's executioners, Sev and Rico infiltrate Stalh's facility and rescue Narville and several other ISA soldiers, being held as prisoners of war and test subjects for Stahl's new weapons. As they flee, Rico and Sev hack into the facility's computers, discovering Stahl is preparing to destroy Earth using irradiated Petrusite weaponry launched from his personal cruiser, currently in orbit around Helghan. The team sets off in pursuit, the fate of Earth now at stake.

The escape of Sev, Rico and Narville embarrasses Stahl in front of the whole Helghan nation. Orlock, who has now become the Helghast's leader, orders Stahl to turn over his new weapons to the Helghan military. He heads for Stahl's flagship to meet him personally, secretly planning to eliminate Stahl once he obtains the weapons. However, Stahl turns on Orlock, demanding his submission. Orlock refuses, leading Stahl to order his cruiser to destroy the surrounding Helghast fleet, hoping to force the Helghan leaders into submission. He is attacked by Orlock, but Stahl quickly overcomes his rival and murders him, before making final preparations for the bombardment of Earth.

Meanwhile, on the ground, the remaining ISA troops assault the orbital elevator that will grant them access to Stahl's cruiser. They encounter fierce resistance, including a vast MAWLR walker, but Sev, Rico, Narville, Hooper, Jammer and their remaining men manage to fight their way through to the elevator and head into space. There they hijack two space fighters and engage the Helghast fleet in a dog fight, eventually managing to destroy Stahl's cruiser with nuclear warheads. However, when the cruiser detonates within Helghan's atmosphere, the irradiated Petrusite it was carrying erupts and leads to a global cataclysm, killing millions on Helghan and wiping out the majority of life on the planet. Jammer remarks that Helghan has gone dark, as she cannot pick up any transmissions from the surface. The remaining ISA personnel are now free to return home, although Sev solemnly contemplates the number of lives lost in the Petrusite explosion.

In a post-credits scene, two Helghast soldiers are searching through the irradiated ruins of Helghan when they come across an escape pod. The pod opens and the soldiers bow to the unseen occupant, greeting him with, "Welcome home, sir."

The gameplay strongly resembles that of Killzone 2 albeit with several tweaks and changes. Similar to the first Killzone, the game takes place in various harsh environments such as Arctic landscapes, a lethal alien jungle, nuclear wastelands as well as space battles rather than only the city-scape environments which were present in Killzone 2. Another notable new feature is the ability to use jet packs in the game, which were also used in Killzone: Liberation; however, these new jet packs will be used in a different manner than that of those in Killzone: Liberation.

The game also features a revamped close combat melee system (called Brutal Melee) which includes new brutal melee attacks as well as the ability to string together multiple attacks in a combo. A new weapon called the WASP has also been added, which acts as a multi-firing rocket launcher firing in spiral formation.

"Operations" is a new game mode that features cinematic scenes and supports up to 16 players per map for each map that supports this mode. In Operations, the ISA and the Helghast battle for control of specific objectives - the ISA on the offensive and the Helghast on defense. The best players are featured throughout the match in cutscenes depicting their successes.

Killzone 3 also supports offline split-screen co-operation for two players, which allows two players using the same console to play the campaign of Killzone 3 offline. This is a feature not present in Killzone 2. This is the only mode that supports offline split-screen multiplayer in Killzone 3. There is also an offline multiplayer mode named 'BotZone' in which players can play against computer bots.

Players can purchase a standalone version of Killzone 3's multiplayer from the PlayStation Store which includes all online multiplayer game modes, all original maps, and all DLC maps, as well as BotZone.

In May 2010, Guerilla Games officially announced Killzone 3 in San Francisco and released screenshots as well as allow a demo for the people present.

Sources confirmed that Killzone 3 will fea-ture improvements on a very large scale, including more weapons like the Wasp (a large, multi-barrelled rocket launcher), the ability to dismount certain mounted weapons for the purpose of using it as a heavy support weapon, fully destructible environments, more vehicle sequences like the use of an armed jetpack, and more varied levels that are ten times larger than those in Killzone 2, i.e. a space level and a mission in a lethal alien jungle.

Also, a new "Brutal" Melee System has been introduced that has shown finishing moves like kicks or neckbreaks. Lastly, the controls will also be fixed to be less sluggish and "clunky". At E3-2010 Guerillia Games announced that Killzone 3 will be playable with the PlayStation Move and will also be playable in 3D. Killzone 3 was released in the US on February 22, 2011.

Killzone 3 received positive reviews and has a GameRankings score of 86.51%, and a score of 84 out of 100 on Metacritic. The first English review of the game was published by PlayStation Official Magazine (UK), which gave the game a 9/10. The review stated "on a visual level, as a 3D breakthrough, this feels like a watershed moment in a revolution affecting all of gaming". The review also stated on gameplay terms, "Black Ops is the only [first-person shooter] on PlayStation 3 that can match this". The voice acting, however, was criticised as not being perfect, thus lacking "emotive punch" and the reason for not receiving a perfect 10/10.

IGN gave the game an 8.5, praising the atmosphere, graphics and multiplayer. Destructoid gave the game a perfect 10/10, with reviewer Jim Sterling stating: "I don't think the PlayStation 3 has ever had quite such a rounded, satisfactory package as this, with this level of polish, refinement and pure, simple, unpretentious action." PlayStation Lifestyle awarded it a 10/10 as well, calling the game "the ultimate ending to a new form of sci-fi epic."

GamesTM was generally positive and gave the game 7/10, although was critical over the storyline and when comparing it to Killzone 2 said the game "...takes inexplicable backward steps in almost every department." Game Informer, who scored the game a 9/10, however praised the story saying "it's shocking and abrupt campaign ending serves as a suitable wrap to Guerilla’s extended war-themed trilogy. Even if it is a conclusion of sorts, Killzone 3 stands on its own." They also praised its intuitive use of the PlayStation Move as an optional controller.

Before Killzone 3's release, Guerrilla Games already had a '"lot of ideas" for the next installment. In an interview with PlayStation Official Magazine (UK), Mathijs de Jonge said: "We're looking at new projects, there's a lot of ideas already floating around the company to put in a new Killzone." On November 18, 2011, Edge reported that Guerrilla Games is making a new Killzone game. Killzone 2 and 3 senior producer Steven Ter Heide is reportedly game director. Guerrilla studio recruiter Adrian Smith is quoted as saying "we've got to continue the Killzone franchise." Earlier in the week Edge reported that one of Sony's studios had stopped PlayStation 3 development and moved onto its successor. The unnamed developer is also apparently involved in building the graphics technology for Sony's next system. Alongside Killzone the studio's also working on a new IP, Edge reported, led by former Killzone game director Mathijs de Jonge.

The sequel was announced by Guerrilla Games as of February 20, 2013 and released on November 15, 2013 in North America, and yet to be released in Europe at November 29, 2013 and Japan at February 22, 2014. It is titled Killzone: Shadow Fall, taking place approximately thirty years afters the events of Killzone 3. The ISA offered the Helghast refugee on Vekta and gave them half of the planet. A cold-war now occurs betwen the two once warring sides.

The Killzone 3 Helghast Edition is not sold in stores and is exclusive to North America. Only 1000 have been made, 125 of which were given away in the multiplayer open beta. The Limited Helghast Edition contains all the same elements as the retail version of the Helghast Edition, but features a replica Helghast Helmet with illuminated LED eyes, simulating Helghast’s glowing mask.

On March 24, 2011, Guerilla announced the "March for Helghan II Sweepstakes" where they gave away 10 Limited Helghast Editions each day (170 total) from March 25 through April 10. Players simply needed to play the Killzone 3 multiplayer for a chance to win.

Killzone 3: The Official Soundtrack (1 hour, 22 minutes, and 26 seconds) was released as downloadable content via the Killzone 3 Helghast Edition and the Collector's Edition (SCEE territories) in February 2011. The soundtrack was composed by Joris de Man and it was released to purchase on the PlayStation Network on March 8, 2011.

Helghan is devastated by a radiated petrusite nuke.

Radec executes a witness to the Nuclear Launch, the Red Dust.

Rico to the rescue
Add a photo to this gallery 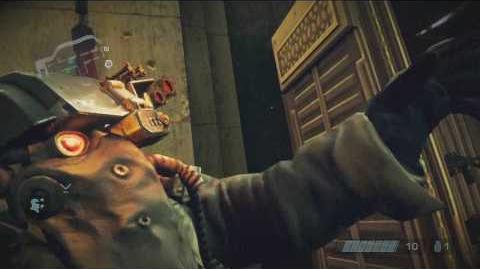 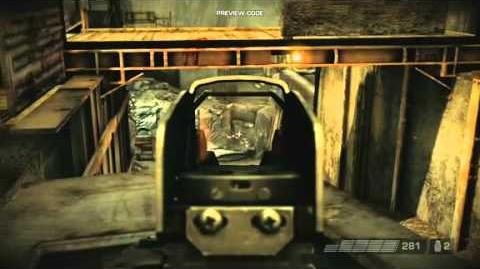 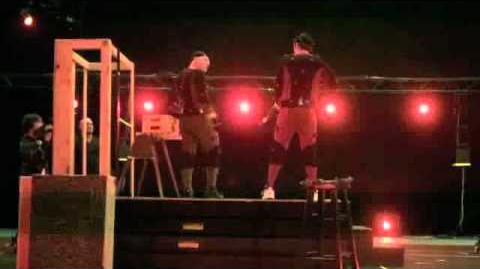 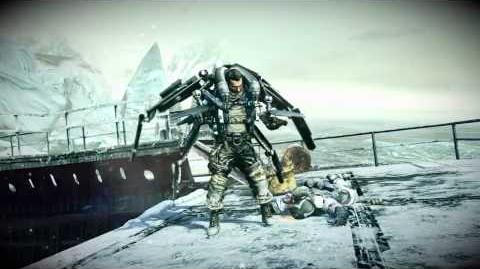 Retrieved from "https://killzone.fandom.com/wiki/Killzone_3?oldid=43753"
Community content is available under CC-BY-SA unless otherwise noted.