After he witnessed his father's death at the hands of the Helghast as a child during the resettlement of the Helghast in Vekta, he was taken under the guidance of Thomas Sinclair, a Shadow Marshal who raised him and after several years, became a Shadow Marshal himself, graduating in the top of his class as well as becoming Sinclair's right-hand man.

As a Shadow Marshal, he is tasked by Sinclair in various missions to spy and gain intel on the Helghast as well as investigate a rising threat in the continuing war between Vekta and the Helghast. He holds some respect and is well known within the ISA, especially its government intelligence branch, the Vektan Security Agency.

During the resettlement of the Helghast following the destruction of Helghan, the Helghast refugees were given half the planet of Vekta as their new home. Lucas and his father Michael Kellan lived in what would one day be New Helghan.

On December 27, 2370, when the Helghast deported several tens of thousands of Vektan civilians out of New Helghan (and killed any who resisted, or simply just killed them either way), Lucas and his father attempted to secretly reach the safety of the Vektan side of The Wall. As the pair began their escape, they were avoiding Helghast patrols and drones until they met and aided by Thomas Sinclair, a Shadow Marshal. When the group nearly reached the wall, Sinclair scouted ahead to ensure that the route was clear. However, Lucas and his father were spotted by a Helghast drone, and though they tried to escape, they were quickly found and held at gunpoint by Helghast soldiers (with Lucas' father getting wounded in the process). Though Michael pleaded for mercy, he was then shot dead, horrifying Lucas. As Lucas was about to be taken or killed too, Sinclair returned and killed the Helghast.

Lucas was then taken in by Sinclair, who would become his mentor and father figure. He would join the Shadow Marshals. At the age of 13, enrolled in Shadow Marshal Academy, and excelled in all areas to finish in the top 2% of his graduating year and working under Sinclair's command. To this very day, his hatred and resentment of the Helghast didn't overshadow his judgement, but he could never forgive them for murdering his father.

Twenty years later, on June 7, 2390, Kellan allowed himself to be captured by the Helghast as part of an investigation. He is brought across The Wall as part of a prisoner exchange for a Helghast agent named Echo. During the release of the prisoners, however, a fire fight erupts. Kellan quickly kills his Helghast escort, but is then punched in the face by Echo, who seizes his weapon and pins him down with it. Fortunately, he is spared by her, as she escapes back into the hands of the Helghast, and he retreats back to the Vektan side of the Wall. He soon reunites with Sinclair, who briefs him on recent Vektan sanctions that have brought the tensions of both the Vektans and Helghast to a boiling point.

Kellan returned later back to the Helghan side of the Wall in order to retrieve classified data. Afterwards, Kellan was then sent by Sinclair to the ISC Cassandra, a classified research ship, to destroy evidence of a bio-tech weapon being created by Dr. Hillary Massar and sending the ship into a nearby sun in order to prevent it from falling to the Helghast. During his infiltration of the ship, Kellan encountered Echo, the Helghast agent who he first encountered during the prisoner exchange back at The Wall. She held him at gunpoint and angrily confronted him, disgusted over how the Helghast are being exploited by Massar and his kind (Vektans) for experiments. He briefly fought her before she escaped. Although Kellan succeeded in scuttling the Cassandra, Dr. Massar defected to the Helghast, in tow with Echo.

Upon returning to VSA Headquarters, Kellan was caught in an explosion that destroyed the building and coming under attack by the Helghan terrorist group, the Black Hand. After repelling the Black Hand, Kellan was sent undercover to New Helghan to find the Black Hand's leader, Vladko Tyran. Eventually, Kellan finds Tyran and learns that he is working for Jorhan Stahl, who is planning to reignite war with Vekta with the use of Massar's bio-tech weapon that has been altered to target Vektans.

Shortly after, Kellan is re-captured by the Helghast, and is brutally tortured and interrogated into unconsciousness in his cell by Anton Saric. After regaining consciousness, he is approached by Echo, who means no harm to Kellan, instead revealing her desire to end animosities between the Vektan and Helghast and to prevent a war between them. He is then asked by Echo on who is Tyran working with, but Kellan demands Echo to untie him, with her responding that he's in no position to bargain. Kellan relents, and reveals to her that Tyran is working with Jorhan Stahl, telling her that he's on Helghan, and since they gave him Massar, she's building a bioweapon for him that will kill everyone, including Half Breeds. Before she can advance the conversation any further, her mother, Lady Hera Visari, steps-in to reprimand Echo for not following orders. Echo and Visari then get into a fight over Visari's allegiance with Stahl, who promised to her a home and the survival of their race, but that the bioweapon will kill everyone, including herself, being a Half Breed. Visari then slaps Echo and orders her guards to take her somewhere safe as she resists on the way out, pleading her mother not to go along with Stahl's plans. Kellan and Visari then exchange a few words with each other before Kellan is once again tortured back into unconsciousness by Saric, who is told by Visari to keep him alive.

Soon afterwards, Kellan regains consciousness and is helped by Echo in escaping from his cell and from New Helghan, returning him to Vekta City. Kellan informs Sinclair of Chancellor Hera Visari's alliance with Jorhan Stahl and their intentions to ignite another war with Dr. Massar's bio-weapon. However, when Kellan tells Sinclair that he was aided by Echo in his escape from New Helghan, he was very displeased upon hearing it, and that he told him that she called for the VSA to stand down from further provoking war with New Helghan. Sinclair disregards Kellan's advice, and dispatches Kellan to track down and retrieve Massar from Helghan.

By the time he finds Massar, Kellan learns that she had finally completed the bio-weapon and it is being ready for its final test. Suddenly, after Kellan and the ISA fight off waves of the Helghast, Echo appears and holds the ISA Agent and Massar at gunpoint. Kellan is then conflicted and pressured by both Sinclair and the ISA agent, the former ordering him to shoot Echo and the latter ordering him to stand down. As Sinclair angrily orders Kellan to shoot Echo, Kellan proceeds to disobey Sinclair's orders and allow Massar and the ISA agent to be killed by Echo. This act of disobedience caused Sinclair to view Kellan as a traitor. Kellan tries to reason with Sinclair on allowing the death of Massar to happen, but condemned him for not following orders and jeopardizing his plans. After being told by Sinclair that if he sides with Echo, he couldn't guarantee his safety, Kellan is questioned by Echo if he knows what he's getting into. Kellan responds that since Sinclair made his choice, it's time to make his. He then proceeds to team up with Echo to stop Jorhan Stahl from deploying the bio-weapon.

Heading towards Helghan, they intercepted a dropship that could lead them to Stahl's base and possibly the bioweapon, as it began to crash towards the planet as a result of impact with debris. As they entered through Helghan's atmosphere, Kellan free falled through the collapsing ruins of Helghan as he followed the vapor trail of the dropship. Kellan would eventually find a place to land, atop the ruins of a skyscraper nearby the crash site of the dropship, and rendezvoused with Echo as they fought and traveled their way through the ruins. Upon reaching the dropship, they discovered that Vladko Tyran was on board and had survived the crash, and followed him towards the base, believing that it will lead them to the bioweapon.

As they headed to Stahl's base on Helghan, they confronted and defeated Tyran, with Echo later executing him after he failed to tell them on how to deactivate the bioweapon, but ISA forces sent by Sinclair arrived and were preparing to lay siege on Stahl's base. Kellan tried to warn Sinclair one last time to abort the assault as Stahl prepares to deploy the weapon, and that Stahl is just leading him to a trap. Unfortunately, Sinclair ignored him, telling him that he has lost what matters most as a soldier, and that "the die is cast." With his attempts to convince Sinclair and the rest of the ISA to stand down futile, Kellan and Echo boarded a ship to Stahl's base. However, Kellan would find himself separated from Echo during the chaos as ISA forces were decimated by Massar's weapon, sending everything around him into chaos and rendering him unconscious for a bit. As soon as everything settled, Kellan regained consciousness, and he attempted to contact Echo, but to no avail before heading alone to confront Stahl.

After fighting off waves of Helghast in the Spire, upon reaching Stahl, as Stahl explains to him the purpose of the Terracide and telling Kellan that Vekta would suffer the same fate, Kellan witnessed Stahl suddenly shot dead, who then turns around and sees that Sinclair, having survived the firing of the bioweapon, was the one that shot Stahl dead. Lucas is then shot in the chest, mortally wounded by Sinclair, as he falls to the ground. As Sinclair approaches Lucas, he looks down on him, disappointed for his betrayal and treachery, and revealed his intentions to restart the war against the Helghast and using Massar's weapon to finally end the Helghast once and for all. As Kellan bleeds out, Sinclair apologizes to Kellan that he couldn't be the person to protect him before executing him with a shot to the head with his LS12 Ripper.

Kellan's death is avenged by Echo, who assassinates Sinclair during his speech in Vetka City, and preventing another war from happening between the Helghast and Vetkans.

Lucas looking through the window as a child

Lucas Kellan with his OWL. 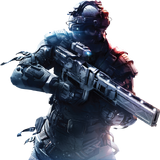 Lucas Kellan and the 2 cities

Gene Farber as Lucas Kellan in the Live Action Trailer

An artwork of Lucas Kellan.

Lucas Kellan Close Up
Add a photo to this gallery