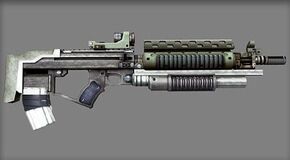 The M82 Assault Rifle is the standard-issue ISA assault rifle using the 6.8 x 43 mm SPC cartridge and was manufactured by ISA Weapon Systems, and may even be in service with the UCA. It saw the most action during the Second Extrasolar War, but was retired by the ISA around 2390 and superseded by the M55 Rumbler.

The technical aspects of the M82 consists of a proprietary gas system to avoid malfunctions and a short-stroke piston driving an operating rod to force the bolt carrier to the rear. This design prevents combustion gases from entering the weapon's interior, a shortcoming with direct impingement systems. These features increase the reliability and decreases the cleaning time of the weapon.

The M82G was commonly used by ISA Rapid Reaction Force during the Helghast assault on Vekta. The ISA Marines used the version without the grenade launcher during the ISA invasion of Helghan. Its equivalent is the Helghast StA52 Assault Rifle.

Strangely, the version of the M82 in Killzone had an underslung 40 mm grenade launcher for a heavier punch, but the latest version used in Killzone 2 and Killzone 3 lacks one. Another visible change is that the launcher has been replaced with a flashlight that somehow cannot be used. This is possibly due to the Killzone variant being in the use of RRF soldiers.

Again, a major change between the two versions of the rifle is that the M82-G has a reflex resembling a Trijicon Reflex II with a polarized lens attachment; the "stripped" version used during the invasion of Helghan has replaced it with a holographic sight most resembling the Eotech 551. However it features a green dot, compared to its real-life counterpart which has a holographic target reticle. With a relatively high accuracy and a medium rate of fire, the M82 is best used at medium range.

However, a skilled marksman can deliver a deadly headshot over a longer range when crouching and using the holographic scope (which is only available in Killzone 2 and Killzone 3). Eventually, if one is skilled enough with this weapon, they will be able to land headshots at Medium Range while moving without having to zoom in. The M82 in Killzone and the M82 in Killzone 2 are quite different from each other.

For example, the version in Killzone does not allow you to actually use the reflex sight, only "zoom" along the path of the muzzle; while zoomed the rate of fire decreases allowing better follow up shots for a more accurate result at further ranges. It is strange that they are considered the same model; however, there is a chance that with the grenade launcher removed, the gun is still the same. Also the overhauled graphics from the PS2 to the PS3 could also account for the changes.

In Killzone, this rifle is the M82-G version, G standing for the underslung 40mm M303 grenade launcher. The M82-G assault rifle is the mainstay weapon of the ISA army. It is proven to be more accurate than the nearest Helghast equivalent when firing rounds one by one; the fire rate and capacity are also relatively low. To compensate, the M82-G has been fitted with the single-shot grenade launcher. It is advisable to use the StA52 Assault Rifle for more accuracy, ammo capacity and fire rate to ensure a smooth run-and-gun.

For Killzone 2, the weapon's model was significantly changed from its appearance in the first game (as were several other weapons in the game). It is no longer fitted with the grenade launcher secondary function, dramatically reducing its firepower, although its rate of fire has been significantly increased to compensate. The assault rifle has also undergone a cosmetic overhaul, no doubt a result of both the developer's move towards more realistic weaponry based on real-life firearms, and the second game's massively improved graphical capabilities.

The M82 in Killzone 3 has apparently undergone no changes from its Killzone 2 incarnation (with the exception of a slightly different reflex sight reticule and different firing sound). It is still the primary weapon of ISA forces. The M82SE Assault Rifle is the silenced variant of the M82 Assault Rifle.

In multiplayer, the M82 can only be used by the Tactician class. However, a special M82SE variant is available to the Medic class; this version has an added silencer and fires in 3 round bursts. It has a generally high range and good firepower, making it a very popular weapon with many players. Some players may chose to level up the Tactician/Field Medic only for their M82. The Field Medic's modified M82 (M82SE) can kill in two bursts, and has very low upward recoil, leading to many headshots. The original reload is the default from the campaign, but when used with the "Faster Reload" Ribbon, the reload is shortened to a 1.6 second reload. To unlock, it requires 5 unlock points; 2 for the second weapon, and 3 for itself.

"Powerful and effective at all ranges. Fitted with a green dot sight for enhanced target acquisition."
—Killzone.com description

The M82 also appears in Killzone: Mercenary as the default weapon. Here, it retains its appearance as seen in Killzone 2 and Killzone 3, with the largest change being slightly larger crosshairs. Additionally, a new reload animation has been added.

The M82 appears in Killzone: Shadow Fall in the first trailer of Shadow Fall.[1] While the M82 was not included in the game at launch, it was re-introduced to multiplayer via The Insurgent Pack useable by the Support class [2], the first multiplayer expansion for Shadow Fall. This version of the M82 has a handful of aesthetic changes that differ it from its apperance in earlier Killzone titles.

Gone are the front-mounted iron sights and dual taped magazines. The underbarrel flashlight attachment has also been removed, replaced with the standard VSA Angled Grip seen on the M55 Rumbler. In Shadow Fall, the M82 handles very similarly to the M55, the only major difference being a more random bullet spread. A recent update allowed to get the M82 Assault rifle for free when you are activating the mystery box, there are chances of you getting it and hence you no longer need to buy the Insurgent expansion pack. 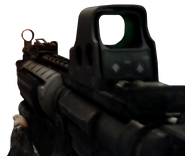 The M82G's appearance in the beta stages of Killzone 2. Note the underbarrel grenade launcher and exposed tactical rail on top of the handguard. 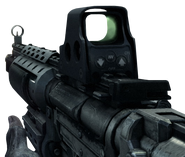 The M82's appearance in the final version of Killzone 2 and Killzone 3. The grenade launcher has been replaced with a flashlight and the upper tactical rail is now covered. 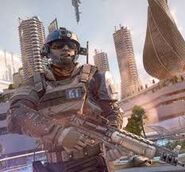 The M82 as it appears in the trailer to Killzone: Shadow Fall.
Add a photo to this gallery

Retrieved from "https://killzone.fandom.com/wiki/M82_Assault_Rifle?oldid=46180"
Community content is available under CC-BY-SA unless otherwise noted.