The MAWLR is a massive Helghast war machine used by the Helghan Empire during the Second Extrasolar War.

Less a mech and more akin to a battleship on legs, the MAWLR is perhaps the largest Helghast ground vehicle encountered over the course of the Second Extrasolar War, standing at a height of 280 meters tall. The MAWLR is heavily armored on all sides, and capable of shrugging off even the most powerful attacks. Its construction is also highly durable, and can continue to operate and fire despite taking heavy damage. The only real weakness of its design comes in the form of cooling vents placed around the machine to prevent a critical system malfunction via overheating, giving a keen-eyed attacker a chance to damage the machine.

Utilized for both anti-ground and anti-air operations with a variety of mounted weapons, a single MAWLR is capable of combating entire battalions of enemy forces. The MAWLR has the following weapons onboard:

Several MAWLRs participated in routing ISA forces that were in full retreat from planet Helghan during the end of Operation Archangel depicted in "Pyrrhus Evac". The war machines were able to destroy ISA Cruisers Dauntless and Compulsion, and thus stranding the ISA forces that were not able to escape.

The ISA remnants led by Captain Jason Narville and Tomas Sevchenko came under an attack by a MAWLR during their attempt to escape Helghan. The MAWLR served as the main boss in "The Reckoning". The ISA managed to destroy the MAWLR, but the battle reduced their numbers to sixty men.

Decades after the Second Extrasolar War, the MAWLR is still in full production, secretly built by the Helghast underneath Helghan's surface and prepared to be used in Jorhan Stahl's new war against Vekta. Dozens of MAWLRs participated in defending Stahl's base from ISA forces shortly prior to Stahl activating Dr. Hillary Massar's bio-weapon that wiped out the ISA. 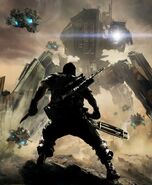 An early version of the MAWLR as it noticeably lacks its massive Petrusite cannon.

Rear of the MAWLR

A MAWLR as seen in the Killzone Shadow Fall story trailer.