Welcome to Killzone Wiki:
The Killzone encyclopedia by fans, for fans.

Please note: This is not a fanon site. We only deal in facts, and where applicable some reasonable speculation. If you wish to write fiction, take it elsewhere.

Killzone: Shadow Fall is the sixth installment in the Killzone franchise. Released in November of 2013 for North America and Europe, it is the most recent game in the series.

Taking place approximately thirty years after the events of Killzone 3, the Helghast and Vektans must share Vekta after the Terracide, divided only by a vast wall.

Tensions are high, and the cold war they are embroiled in is about to go hot. In the midst of this all stands a Shadow Marshal, you. The most special of the special forces, tasked with maintaining the delicate balance.

From responding to bold attacks, to quiet infiltrations or all out combat, you will be required to adapt and think on your feet as you have to face a variety of escalating events that could destroy your home world. 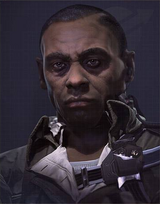 Thomas Sinclair is a veteran of the Second Extrasolar War and the head of the VSA. A patriot who hates the Helghast with a passion, he leads secret operations into the other side of the wall against the Helghast. After saving a young man and taking him under his wing, he may soon find that not everyone shares his views on the Helghast..

Want your community included? See how!

Retrieved from "https://killzone.fandom.com/wiki/Main_Page?oldid=45415"
Community content is available under CC-BY-SA unless otherwise noted.