Maya "Echo" Visari (born 2366) is the deuteragonist of Killzone Shadow Fall. She is a Helghast half-breed intelligence operative of the New Helghan government and the daughter of Chancellor Hera Visari.

Echo was born Maya Visari to Chancellor Hera Visari, making Maya the granddaughter of the late Scolar Visari, the founder of the Helghan Empire. Her father is thought to be Vektan; though his identity has also yet to be determined. It is currently unknown how many Helghast know of Maya's familial relations, though it's certainly likely that no one from Vekta ever knew it. Not even the VSA special forces had much information on her, other than their intel describing her as a half-breed.[1]

Little is known of Maya's early history. It is believed that she was housed in a boarding school outside of Vekta City and most likely had limited contact with her mother throughout this period. Maya returned to New Helghan at around the age of 16, having acquired considerable firearms and combat training.[1]

Maya was put to work for Commander Anton Saric with the aim of infiltrating a number of anti-government groups within New Helghan. She is known to be fiercely defensive of her people. The VSA considered Maya to be highly dangerous and wanted for multiple counts of murder and espionage.[1]

Echo was captured by the ISA and later brought to a prisoner exchange on June 6, 2390; in which she is being exchange for VSA operative Lucas Kellan. But during the release of the prisoners, a firefight erupts. Kellan quickly kills his Helghast escort, but Echo punches him and seizes his weapon and trains it on him. However, Echo instead spares Kellan's life and escapes back into the hands of the Helghast.

Echo is later dispatched by her government to the ISC Cassandra to apprehend Dr. Hillary Massar and her bio-weapon research. There, she was left deeply disgusted and angered by Massar's inhumane experiments on the Helghast migrant workers that were being used as test subjects. Echo once again confronted Kellan at gunpoint in which she accused him and his people's complicity in Massar's experiments. Echo then escaped with Massar after a brief fight with Kellan. After bringing Massar aboard her ship, the VSA scientist remarked how different Echo is compared to other Helghast and correctly assume that she is a half-breed, stating that Echo's blood is "tainted," and she'd gladly test a sample to find what percentage of her genome is Vektan. Unsettled by Massar's comments, Echo angrily ordered her troops to take her away.

Echo later meets Kellan again when he is captured and tortured by the Helghast authority during his undercover mission to find the leader of the Black Hand, Vladko Tyran. She reveals that she means Kellan no harm, instead seeking to end the hostilities between Vektans and Helghast, rather then ignite another war. Echo demanded Kellan to tell her on the identity of Tyran's benefactor, in which he tells her that he's working for Jorhan Stahl while also revealing that Massar is building a biological weapon for Stahl that will kill all humans, including half-breeds.

Before she could go further, Hera Visari steps in to reprimand Echo. Echo is unhappy with the Chancellor's bargain with Stahl, stating that using a biological weapon would end very badly for both Helghast and Vektans, wishing nothing but contempt for Massar. An argument ensues between them, in which Echo questioned her mother what Stahl promised her, with Visari responding that Stahl promises her a home alongside the survival of the Helghast, just what they wanted and deserved. However, Echo disagrees in which she brought up her half-breed heritage, stating that she would be killed no matter who is targeted. At this point, Echo pleads by calling her "Mother," only to have the Chancellor angrily slap her. Lady Visari then ordered the guards to take Echo somewhere safe. Echo resisted along the way out, begging her mother not to go along with Stahl's plans but to no avail.

Later, Echo helped Kellan escape from New Helghan and returned him to the Vektan side of The Wall while showing him the suffering the common Helghast endured under the Vektan sanctions imposed on New Helghan. She then traveled to Helghan with the intentions of eliminating Massar and preventing her research from falling into both the Helghast and Vektans. Eventually, Echo reunited with Kellan in an tense stand off over Massar. Kellan hesitated to shoot Echo, allowing her to kill Massar. Consequently, Lucas is condemned as a traitor by Thomas Sinclair.

Afterwards, Echo questions Kellan if he knows what he's about to get himself into, which he responded that Sinclair made his choice, and it's his turn to make his. Echo and Kellan teamed up and traveled to planet Helghan proper to prevent Stahl from unleashing his bio-weapon. The two infiltrated Stahl's base, where they fought and defeated Tyran. Echo attempted to interrogate Tyran on how to deactivate Massar's bio-weapon, but he refuses to budge, instead exclaiming his contempt for New Helghan's compromises with the Vektan people. Echo then proceeded to execute Tyran by shooting him in the head.

Afterwards, after Kellan failed to convince Sinclair and the rest of the ISA forces to stand down due to the inevitable futility of attempting to stop the bio-weapon from firing and that Stahl is just leading them to a trap, Echo and Kellan board a ship to Stahl's base, with Echo remarking on how they're now both outcasts, but that it wasn't a bad thing to have in common. As the ISA began their attack, Stahl fired Massar's bio-weapon and Echo was separated from Kellan in the chaos. Sometime after Stahl was killed, Echo learned about Kellan's death at the hands of Thomas Sinclair.

One month later, Echo (under Lucas Kellan's name) infiltrated Vekta City to assassinate Sinclair as he preside over a political ceremony to call for war against the Helghast. From a vantage point, Echo used a sniper rifle to kill Sinclair, avenging Kellan and preventing another war.

Echo is a half-Vektan, half-Helghast woman in her mid to late 20s. Her uniform consists of plated gray armor, black straps, navy blue limb guards and sheaths on her arms to hold her knives. Her head and neck are covered by a red cloth reminiscent of the design of Helghast sniper hoods. The Helghast side of her seems to be dominant; she exhibits typical Helghast traits like pale skin and dark lips. Echo's Visari lineage is very apparent in her bright green eyes. Her difficult background as a Helghast agent is evident by the scars on her face and scratches on her armor. The StA-61 rifle is her weapon of choice; when she isn't using it, she keeps it latched onto her back. Though not seen in-game, the box art implies that she has dark brown or black hair.

The daughter of Hera Visari and granddaughter of Scolar Visari, Echo comes from a long line of Helghast aristocrats and politicians. It's currently unknown who her Vektan father is, yet Echo states that she is not ashamed of her hybrid heritage. As the Chancellor's daughter and an elite soldier of the Helghast Intelligence Agency, Echo holds some degree of command.

It's implied that Echo is quite tenacious and passionate, to the point of seeming disobedient and rebellious. This is seen as she argues with her mother, and Lucas remarking that she seems to have a habit of disobeying orders. This could also explain why she's a soldier despite being born into a rich and powerful Helghast family. What drives Echo is her intention to end hostilities on both sides. Her desire for peace is so great that she's willing to trust Lucas Kellan and disobeying her superiors, including her mother.

On top of that, Echo takes huge risks to kill fellow soldiers to allow Kellan to safely escape New Helghan and deliver her message to Sinclair that Vekta needs to stand down. She cares very much for her people and their well-being; she's glad that a Vektan like Lucas gets a glimpse of their lives for a change. She comes to value Kellan's trust and companionship over time; after he dies at the hands of Sinclair, she takes it upon herself to exact justice for his murder.

Echo is an excellent marksman and a proficient hacker. She is also skilled in hand-to-hand combat and wielding knives. Her intimate knowledge of the areas and routes in New Helghan were crucial when helping Lucas escape. She is capable of both marking and sniping with ease. Echo is adept at infiltration using her cloak. It's currently not known if she has the oratory skills and political charisma her mother and grandfather possess.

Echo telling Kellan of her plead to prevent the war.

Echo tries to reason with her mother. 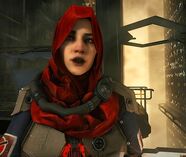 Close up of Echo's face

Maya's dossier file.
Add a photo to this gallery

Retrieved from "https://killzone.fandom.com/wiki/Maya_Visari?oldid=46679"
Community content is available under CC-BY-SA unless otherwise noted.