It has a cylindrical magazine that holds 48 rounds of the 9.2 x 20 mm cartridge, with a max-carry limit of 384, or 8 magazines. It has a high rate of fire and low recoil, which compensates for the low damage. Only downside is that the player must reload often in order to avoid being caught with an empty mag.

"No other automatic weapon is better suited to close-range, in-your-face encounters than the StA11."
—Weapon description[src]

In Killzone 3, the StA-11 SMG appears largely unaltered, although its stopping power has been slightly increased. In the single player campaign, the SMG deals twice as much damage as an assault rifle at point blank range, and an equal amount of damage as an assault rifle at normal range. Killzone 3 also features the StA-11SE Submachine Gun, the suppressed version of the gun, in botzone. 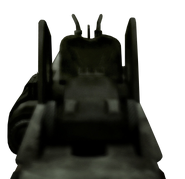 Aiming down the sights.