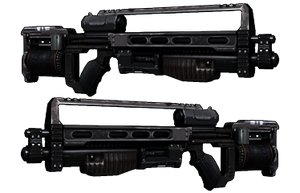 The StA-52 is a assault rifle used by the Helghast Army.

The StA-52 Assault Rifle is a common weapon in Killzone. It is mainly used by the Helghast and it is manufactured by Stahl Arms. All variants of the StA-52 are chambered in the 5.56x45mm cartridge. The Killzone variant features a 12 gauge under-barrel shotgun.

The StA-52 LAR as all other weapons has 2 versions, the 2nd one being more powerful than the previous.

The Helghast Assault Rifle is the standard Helghan automatic assault weapon, well-suited for short- and mid-range engagements. It has a high fire rate but quickly loses accuracy with sustained fire. It has an Iron Sight for greater accuracy, though it lacks the level of accuracy that ISA's M82 delivers. The shotgun attachment has also been removed in Killzone 2, making the rifle little more than a simple assault weapon with almost no use in short range combat unlike its Killzone incarnation.

The Stahl Corporation has modified all examples of the StA-52, making it a more "modern" rifle. Most notably, it's modular rail/iron sight has been replaced with a red holographic sight. The weapon's recoil and accuracy have also been drastically improved.

The StA52SE rifle for Killzone online has a 5 round burst and has a suppressor. It's the final unlock for the Infiltrator in Multiplayer.

The StA-52SE Assault Rifle is available at Blackjack's shop. It can be used for infiltration missions as a silent mid-range assault rifle because none of the soldiers are able to hear the gunfire unless it is seen. It can also be used in close to mid-range combat instead of stealth if the player chooses. It can take out most targets easily with a couple of rounds or a headshot but more heavily armored Helghast such as Pyro troopers and heavies are impervious to the weapon.

Retrieved from "https://killzone.fandom.com/wiki/StA-52_Assault_Rifle?oldid=44748"
Community content is available under CC-BY-SA unless otherwise noted.