The Wall is a planet-spanning barrier that divides Vekta. The barrier is established to separate the Vektan nation and New Helghan from each other, due to the resentment they bear over the Second Extrasolar War. It was constructed jointly by the New Helghan and Vektan governments—and it was the only venture that the Vektans and Helghast have fully cooperated with each other—in 2364. The Wall has since become a symbol of the Cold War.

After the Terracide, the Helghan Empire was utterly destroyed and planet Helghan was left uninhabitable. The ISA granted the Helghast survivors refuge on Vekta, allowing them to colonize half the planet, which they dubbed New Helghan. However, the Helghast and Vektans strongly refused to seek reconciliation over their roles in the Second Extrasolar War. As a result, violence became increasingly common between Helghast and Vektans, and the two civilizations created a border and began to fortify their sides.

The Wall began to be built in 2364 and took approximately three years to complete while many Vektans were still making their way to the ISA-controlled side of the planet. The Wall spans the entire circumference of the planet and varies in height and width. The Wall's highest point reaches 235 meters at the section which passes through Vekta City. The partition comprises of two walls that are separated by a 200 meter wide neutral zone. Both walls are heavily fortified with manned anti-aircraft guns and automated turrets.

In areas that are heavily populated the Wall is very tall and very wide, the oceans are patrolled constantly by boat and aircraft and maintained by automated buoys and floating defense platforms with the occasional cruiser fly by. The areas that are less densely populated are heavily mined and have automated sentries to discourage border crossing between the two sides. There are very few gates all heavily guarded and fortified to permit refugee travel.

The Helghast have made several large statues that can be seen from Vektan territories enraging the Vektan population. Both Vektan civilians and soldiers have been known to fire warning shots at Helghast patrols or the statues of Scolar Visari. Many Helghast have immigrated to the Vektan side of the wall as labor, but are heavily discriminated against and often are forced back to New Helghan along with half breeds to prevent a Helghast uprising in Vektan territory. 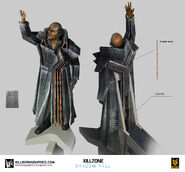 Retrieved from "https://killzone.fandom.com/wiki/The_Wall?oldid=45001"
Community content is available under CC-BY-SA unless otherwise noted.