"We like to think it's a paradise where we live. It's amazing what you'll do to protect that."
—Lucas Kellan[src]

Vekta is a planet located in the Alpha Centauri system orbiting Alpha Centauri B. It is a rich agrarian planet with atmospheric and geological conditions similar to Earth. Vekta is a highly strategic importance to the United Colonial Nations and its surrounding colonies.

During the Terran Era (2055–2128), Earth was limited on nearly all types of resources. Years of nuclear war broke out as a result, and soon humankind was forced to search for new habitats in order to sustain itself. After numerous failed attempts at colonization by various corporations, the Helghan Corporation raised enough funds to build its own colonization program.

Arriving in the Alpha Centauri system, scientists discovered that the nearest planet in the system, Helghan, was a planet filled with rich resources but unsuitable for human colonization due to a volatile atmosphere and poor ecosystem. However, a nearby planet resembling Earth featured a more suitable habitat. The Helghan Corporation named the planet after its CEO Philip Vekta and so the planet was colonized in 2129. The population of Vekta is numbered around 3.2 Billion according to a census that was carried out at least 5 years before the Second Extrasolar War, but due to the war the population has been halved due to the Helghasts genocidal and brutal extermination of much of the civilian population in Vekta City and the surrounding areas.

Though the vital planet's ownership fell under the Helghan Corporation for decades, it was eventually ceded to the United Colonial Nations following the events of the First Extrasolar War and the dissolution of the Helghan Corporation. The UCN then installed the Alpha Centauri Interplanetary Strategic Alliance Command to act as a new government for Vekta. In addition, settlers from Earth were brought in to supplement the corporate population that was already on Vekta.

In the face of brutal draconian laws and punishments, by 2220, all Helghan corporate loyalists had voluntarily emigrated from Vekta to settle on Helghan, eventually becoming the Helghast. Thus, Vekta was left solely to the ISA and its Earth-loyal settlers. With the Helghast terrorism, ISA-backed oppression, and the Helghasts' inevitable resulting expulsion, the two people were set on a crash course for the Second Extrasolar War.

Vekta was invaded by the Helghast during the outbreak of the Second Extrasolar War in 2357, but they were driven out by the ISA and a UCA Navy task force. By 2359, the planet was fully liberated and rebuilt for the ISA counter-invasion of Helghan. However, the counter-invasion failed and by 2360 the Vektan Colonial Government capitulated and agreed to end all conflict with the Helghast, ordering all remaining ISA forces to retreat from Helghan. Any ISA troops that were trapped on Helghan were then ordered to stand down and surrender to the Helghast.

The war ended when the remnants of the ISA invasion force inadvertently caused the Terracide, during an effort to save Earth from destruction by the Helghast and escape the planet. The Helghast survivors were allowed by the ISA to take refuge on Vekta in the wake of planet Helghan's devastation in the war. Due to the two civilization's animosity towards each other, as part of a political settlement, the entire planet was to to be split in half between Vektans and Helghast.

Towering and heavily fortified walls separate the cities and communities of the Vektan and Helghast people, with both living starkly contrasting lives on either side of the walls, as the Helghast attempted to replicate their harsher and industrialized lifestyle while Vektans had retained its more cleaner and utopian one. At this point, Vekta became used to identify the ISA half of the world, while the other was renamed New Helghan. Despite the society and culture of both Vektans and Helghast not mingling, interracial relationships between Helghast and humans have produced a population of mixed-race half-breeds. Prejudice against these half-breeds grew on both sides of the wall, in which many of them were turned into unwanted pariahs liable to be faced with varying degrees of persecution.

Despite the Second Extrasolar War exhausting both sides, tensions between New Helghan and Vekta grew once again. The partitioning of Vekta caused dissent to grow in the Vektans and Helghast alike, and the governments of the two people soon rearmed and fought covert wars. Helghast terrorists would attack ISA installations and Vektan civilians, while the Vektan Security Agency conducted illegal incursions into New Helghan. Despite the insurgency, open conflict was narrowly averted, even as the ISA and Helghast attacked each other covertly.

Typically described as an Eden-class world, Vekta is covered with lush, fertile land, with flowing lakes and oceans. Vekta is self-sufficient in food production and serves as a stable point for administration and manufacturing. Vekta's approximate mass and atmospheric conditions mirror that of Earth's.

It is also a planet of significant strategic importance to the UCN as it acts as a jump point between Earth and other colonies. It is also a significant source of food and various other resources for Earth and many of her colonies. Upon the arrival of Helghast refugees and the founding of New Helghan, half of the planet has been heavily industrialized and somewhat replicates the hellish environment of Helghan.

The mandatory military of all UCN colonies is known as the Interplanetary Strategic Alliance. Each ISA is independent, much like a normal military. Planets provide funding and manpower, while the UCN provides training and equipment, although they keep the ISA of every colony world, including Vekta, inferior compared to the United Colonial Army in order to prevent them from ever staging a successful rebellion.

Even though the UCN provide equipment to ISA Alpha Centauri, this is not to say Vektans do not manufacture their own equipment or even develop new weapons, as weapons such as the M55 Rumbler by ISA Weapon Systems clearly prove otherwise. 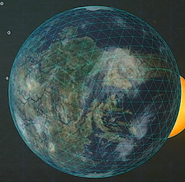 Orbital View of Vekta
Add a photo to this gallery

Retrieved from "https://killzone.fandom.com/wiki/Vekta?oldid=45589"
Community content is available under CC-BY-SA unless otherwise noted.